Cartographer is a complex system and tuning it requires a good understanding of its inner working. This page tries to give an intuitive overview of the different subsystems used by Cartographer along with their configuration values. If you are interested in more than an introduction to Cartographer, you should refer to the Cartographer paper. It only describes the 2D SLAM but it defines rigourously most of the concepts described here. Those concepts generally apply to 3D as well. 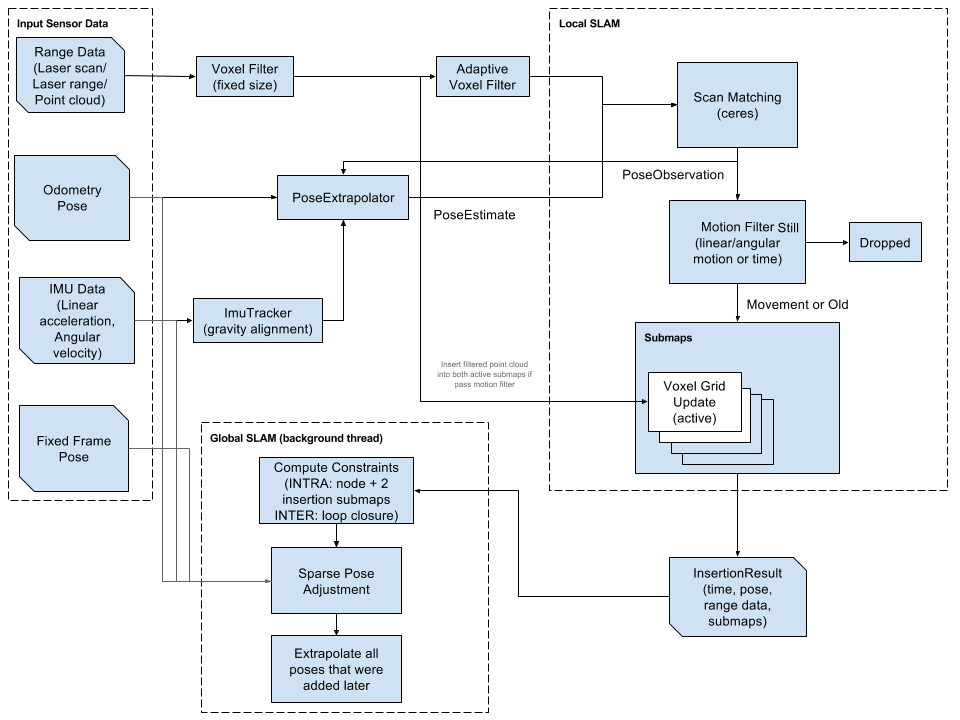 Cartographer can be seen as two separate, but related subsystems. The first one is local SLAM (sometimes also called frontend or local trajectory builder). Its job is to build a succession of submaps. Each submap is meant to be locally consistent but we accept that local SLAM drifts over time. Most of the local SLAM options can be found in install_isolated/share/cartographer/configuration_files/trajectory_builder_2d.lua for 2D and install_isolated/share/cartographer/configuration_files/trajectory_builder_3d.lua for 3D. (for the rest of this page we will refer to TRAJECTORY_BUILDER_nD for the common options)

The other subsystem is global SLAM (sometimes called the backend). It runs in background threads and its main job is to find loop closure constraints. It does that by scan-matching scans (gathered in nodes) against submaps. It also incorporates other sensor data to get a higher level view and identify the most consistent global solution. In 3D, it also tries to find the direction of gravity. Most of its options can be found in install_isolated/share/cartographer/configuration_files/pose_graph.lua

Range finding sensors (for example: LIDARs) provide depth information in multiple directions. However, some of the measurements are irrelevant for SLAM. If the sensor is partially covered with dust or if it is directed towards a part of the robot, some of the measured distance can be considered as noise for SLAM. On the other hand, some of the furthest measurements can also come from undesired sources (reflection, sensor noise) and are irrelevant for SLAM as well. To tackle those issue, Cartographer starts by applying a bandpass filter and only keeps range values between a certain min and max range. Those min and max values should be chosen according to the specifications of your robot and sensors.

In 2D, Cartographer replaces ranges further than max_range by TRAJECTORY_BUILDER_2D.missing_data_ray_length. It also provides a max_z and min_z values to filter 3D point clouds into a 2D cut.

In Cartographer configuration files, every distance is defined in meters

Distances are measured over a certain period of time, while the robot is actually moving. However, distances are delivered by sensors “in batch” in large ROS messages. Each of the messages’ timestamp can be considered independently by Cartographer to take into account deformations caused by the robot’s motion. The more often Cartographer gets measurements, the better it becomes at unwarping the measurements to assemble a single coherent scan that could have been captured instantly. It is therefore strongly encouraged to provide as many range data (ROS messages) by scan (a set of range data that can be matched against another scan) as possible.

Range data is typically measured from a single point on the robot but in multiple angles. This means that close surfaces (for instance the road) are very often hit and provide lots of points. On the opposite, far objects are less often hit and offer less points. In order to reduce the computational weight of points handling, we usually need to subsample point clouds. However, a simple random sampling would remove points from areas where we already have a low density of measurements and the high-density areas would still have more points than needed. To address that density problem, we can use a voxel filter that downsamples raw points into cubes of a constant size and only keeps the centroid of each cube.

An Inertial Measurement Unit can be an useful source of information for SLAM because it provides an accurate direction of gravity (hence, of the ground) and a noisy but good overall indication of the robot’s rotation. In order to filter the IMU noise, gravity is observed over a certain amount of time. If you use 2D SLAM, range data can be handled in real-time without an additional source of information so you can choose whether you’d like Cartographer to use an IMU or not. With 3D SLAM, you need to provide an IMU because it is used as an initial guess for the orientation of the scans, greatly reducing the complexity of scan matching.

In Cartographer configuration files, every time value is defined in seconds

Once a scan has been assembled and filtered from multiple range data, it is ready for the local SLAM algorithm. Local SLAM inserts a new scan into its current submap construction by scan matching using an initial guess from the pose extrapolator. The idea behind the pose extrapolator is to use sensor data of other sensors besides the range finder to predict where the next scan should be inserted into the submap.

Either way, the CeresScanMatcher can be configured to give a certain weight to each of its input. The weight is a measure of trust into your data, this can be seen as a static covariance. The unit of weight parameters are dimensionless quantities and can’t be compared between each others. The bigger the weight of a source of data is, the more emphasis Cartographer will put on this source of data when doing scan matching. Sources of data include occupied space (points from the scan), translation and rotation from the pose extrapolator (or RealTimeCorrelativeScanMatcher)

The CeresScanMatcher gets its name from Ceres Solver, a library developed at Google to solve non-linear least squares problems. The scan matching problem is modelled as the minimization of such a problem with the motion (a transformation matrix) between two scans being a parameter to determine. Ceres optimizes the motion using a descent algorithm for a given number of iterations. Ceres can be configured to adapt the convergence speed to your own needs.

The RealTimeCorrelativeScanMatcher can be toggled depending on the trust you have in your sensors. It works by searching for similar scans in a search window which is defined by a maximum distance radius and a maximum angle radius. When performing scan matching with scans found in this window, a different weight can be chosen for the translational and rotational components. You can play with those weight if, for example, you know that your robot doesn’t rotate a lot.

To avoid inserting too many scans per submaps, once a motion between two scans is found by the scan matcher, it goes through a motion filter. A scan is dropped if the motion that led to it is not considered as significant enough. A scan is inserted into the current submap only if its motion is above a certain distance, angle or time threshold.

A submap is considered as complete when the local SLAM has received a given amount of range data. Local SLAM drifts over time, global SLAM is used to fix this drift. Submaps must be small enough so that the drift inside them is below the resolution, so that they are locally correct. On the other hand, they should be large enough to be distinct for loop closure to work properly.

Submaps can store their range data in a couple of different data structures: The most widely used representation is called probability grids. However, in 2D, one can also choose to use Truncated Signed Distance Fields (TSDF).

Probability grids cut out space into a 2D or 3D table where each cell has a fixed size and contains the odds of being obstructed. Odds are updated according to “hits” (where the range data is measured) and “misses” (the free space between the sensor and the measured points). Both hits and misses can have a different weight in occupancy probability calculations giving more or less trust to occupied or free space measurements.

In 2D, only one probability grid per submap is stored. In 3D, for scan matching performance reasons, two hybrid probability grids are used. (the term “hybrid” only refers to an internal tree-like data representation and is abstracted to the user)

Cartographer ROS provides an RViz plugin to visualize submaps. You can select the submaps you want to see from their number. In 3D, RViz only shows 2D projections of the 3D hybrid probability grids (in grayscale). Options are made available in RViz’s left pane to switch between the low and high resolution hybrid grids visualization.

While the local SLAM generates its succession of submaps, a global optimization (usually refered to as “the optimization problem” or “sparse pose adjustment”) task runs in background. Its role is to re-arrange submaps between each other so that they form a coherent global map. For instance, this optimization is in charge of altering the currently built trajectory to properly align submaps with regards to loop closures.

The optimization is run in batches once a certain number of trajectory nodes was inserted. Depending on how frequently you need to run it, you can tune the size of these batches.

Setting POSE_GRAPH.optimize_every_n_nodes to 0 is a handy way to disable global SLAM and concentrate on the behavior of local SLAM. This is usually one of the first thing to do to tune Cartographer.

The global SLAM is a kind of “GraphSLAM”, it is essentially a pose graph optimization which works by building constraints between nodes and submaps and then optimizing the resulting constraints graph. Constraints can intuitively be thought of as little ropes tying all nodes together. The sparse pose adjustement fastens those ropes altogether. The resulting net is called the “pose graph”.

Constraints can be visualized in RViz, it is very handy to tune global SLAM. One can also toggle POSE_GRAPH.constraint_builder.log_matches to get regular reports of the constraints builder formatted as histograms.

In practice, global constraints can do more than finding loop closures on a single trajectory. They can also align different trajectories recorded by multiple robots but we will keep this usage and the parameters related to “global localization” out of the scope of this document.

When a node and a submap are considered for constraint building, they go through a first scan matcher called the FastCorrelativeScanMatcher. This scan matcher has been specifically designed for Cartographer and makes real-time loop closures scan matching possible. The FastCorrelativeScanMatcher relies on a “Branch and bound” mechanism to work at different grid resolutions and efficiently eliminate incorrect matchings. This mechanism is extensively presented in the Cartographer paper presented earlier in this document. It works on an exploration tree whose depth can be controlled.

Once the FastCorrelativeScanMatcher has a good enough proposal (above a minimum score of matching), it is then fed into a Ceres Scan Matcher to refine the pose.

When Cartographer runs the optimization problem, Ceres is used to rearrange submaps according to multiple residuals. Residuals are calculated using weighted cost functions. The global optimization has cost functions to take into account plenty of data sources: the global (loop closure) constraints, the non-global (matcher) constraints, the IMU acceleration and rotation measurements, the local SLAM rough pose estimations, an odometry source or a fixed frame (such as a GPS system). The weights and Ceres options can be configured as described in the Local SLAM section.

One can find useful information about the residuals used in the optimization problem by toggling POSE_GRAPH.max_num_final_iterations

In residuals, the influence of outliers is handled by a Huber loss function configured with a certain a Huber scale. The bigger the Huber scale, the higher is the impact of (potential) outliers.